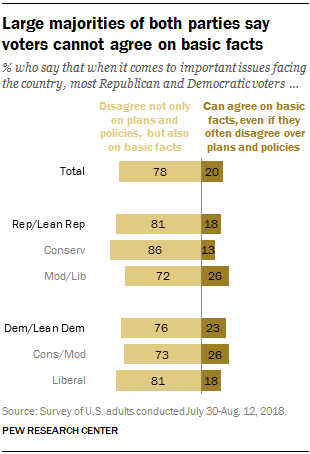 “Nearly eight-in-ten Americans say that when it comes to important issues facing the country, most Republican and Democratic voters not only disagree over plans and policies, but also cannot agree on basic facts.”

“About eight-in-ten Republicans and Republican-leaning independents (81%) say Republican and Democratic voters disagree on basic facts of issues. A similar – albeit slightly smaller – share of Democrats and Democratic-leaning independents (76%) say the same. Just 18% of Republicans and 23% of Democrats say that voters of the two parties can agree on basic facts even if they disagree over policies and plans.”

President Trump commemorated John McCain for his life of service to the country — but it took him all day to get there. After ignoring questions about the late senator and taking flack for raising the flags at the White House after briefly lowering them after McCain died, Trump put out a statement expressing his “respect” for the former POW and war hero. Trump later said he appreciated “everything that Sen. McCain has done for our country.” And he ordered flags lowered again. Pressure from Trump’s aides and criticism from the American Legion seemed to push the President to say more about McCain.

Meanwhile, Trump celebrated movement in the NAFTA talks. The President said the US is dropping NAFTA in favor of a bilateral agreement with Mexico and possibly a second bilateral deal with Canada. But what he announced Monday isn’t there yet. So far, there’s only a deal between the US and Mexico on how to resolve key issues in the trade relationship. That was enough for Wall Street, though. The S&P 500 and the Nasdaq closed at all-time highs, and the Dow finished over 26,000 for the first time in six months.

Disney offers to pay tuition for thousands of workers
The Walt Disney Co. on Wednesday said it was offering to pay full tuition for hourly workers seeking a college degree, finishing high school, or training to acquire a new skill. The program could benefit as many as 80,000 hourly workers in the U.S. Disney said it would start paying tuition for employees in online classes this fall. Disney plans to invest $50 million in its “Disney Aspire” program initially, then add up to $25 million a year. “The Walt Disney Company will cover 100 percent of tuition upfront and will also reimburse application fees and required books and materials, removing the worry of paying to start or continue school,” said Jayne Parker, Disney’s chief HR officer, in a blog post. The entertainment giant is the latest major corporation to offer such educational benefits as executives seek ways to attract and keep employees in a tightening job market.

Parkland Students Are Getting An Official School Therapy Dog
The Florida high school where 17 people were killed in a mass shooting is getting a therapy dog to help students who need emotional support.
River, a 3-month-old female Bernese mountain dog-poodle mix, has been adopted by Ray and Diana Haneski.
Diana is a library media specialist at Marjory Stoneman Douglas High School, where she helped shelter 50 kids during the attack.
Now she’ll be able to take River into the school for anyone who needs comforting.
She told NBC 6 after meeting the dog Thursday that “it’s magical.”
As she tries to prepare herself to return to the school, she said, “River’s going to help in the future with a lot of struggles and trouble.”
A mini bernedoodle like River averages 30 to 45 pounds (14 to 20 kilograms) fully grown.

LOVE FOR SELF AND OTHERS, I agree with the saying that happiness is indirectly proportional to love. Well, I want to remind you to look in the mirror at some point today and say I love you to the person you see. Add some happiness and love in day.

SOME VALUES TO LIVE BY,  RESPECT FOR OTHERS, ACCEPTANCE AND APPRECIATION OF PEOPLE OF DIFFERENT RACIAL, ETHNIC AND RELIGIOUS GROUP, SERVICE TO OTHERS, GENEROSITY, HONESTY, EMPATHY, INTEGRITY

Written out
John Goodman says Dan will be “sad” on “The Conners” because his wife is dead, a clear sign of how Roseanne Barr’s exit from the show will be handled.

True blue
Her school said her blue-black wig was a dress code violation and shouldn’t be worn. But a student with brain cancer said it gave her strength in her fight.

Rock of ages
Dwayne “The Rock” Johnson became a rock for a family reeling after a mother and daughter were killed in a wrong-way car crash.

Under the sea
It’s not the Great Barrier Reef, but the newly discovered giant deep-sea coral reef, off South Carolina’s coast, is still a pretty significant find.

See details about the monthly drawing.