Government says legislation is aimed at custom of child marriages 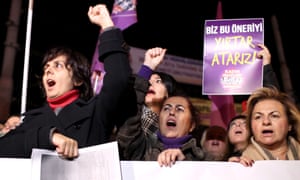 Turkish women protest against a bill which would pardon some people imprisoned for statutory rape. Photograph: Sedat Suna/EPA

A bill in Turkey that would overturn men’s convictions for child sex assault if they married their victim has provoked fury, with critics accusing the government of encouraging rape of minors with the proposals.

The opposition, celebrities, and even an association whose deputy chairman is the daughter of President Recep Tayyip Erdoğan expressed alarm over the move.

But the government insisted the legislation was aimed at dealing with the widespread custom of child marriages and the criticism was a crude distortion of its aim.

The measures were approved in an initial parliamentary reading on Thursday and will be voted on again in a second debate in the coming days.

If passed, the law would allow the release from prison of men guilty of assaulting a minor if the act was committed without “force, threat, or any other restriction on consent” and if the aggressor “marries the victim”.

The legal age of consent in Turkey is 18 but child marriage is widespread, especially in the southeast.

Dozens protested against the bill in central Istanbul, tearing up copies of the proposed legislation and brandishing slogans like “rape is a crime against humanity”.

“Until she is 18, a child remains a child, that is why this has to be condemned,” said protester Fadik Temizyurek.

The bill was brought to parliament by the ruling Justice and Development Party (AKP).

“The AKP is pushing through a text which pardons those who marry the child that they raped,” said an MP for the opposition Republican People’s Party (CHP) Ozgur Ozel.

Prominent actor Nurgül Yeşilçay tweeted that “what we are talking about is not being a woman in this country, or being a man, but staying a human being”.

On Twitter, the hashtag TecavuzMesrulastirilamaz (Rape Cannot be Legitimised) became a top-trending topic as users took to social media to express their anger.

A petition on change.org urging the authorities to block the legislation has received over 600,000 signatures.

The pro-government Women’s and Democracy Association (Kadem), whose deputy chairman is Erdoğan’s younger daughter Sümeyye Erdoğan Bayraktar, said one of the biggest problems of the bill would be proving what constituted force or consent.

“How can the ‘own will’ of such a young girl be identified?” it asked. “We would like to draw attention to issues that might arise in case of it coming into force.”

The prime minister Binali Yıldırım said the measure would only be applied once on past convictions, applying to offences committed before 11 November, 2016.

“There are people who get married before reaching the legal age. They just don’t know the law,” he told reporters in Ankara, adding that the measure aims to “get rid of this injustice”.

He said claims that the law would de facto legalise rape were “completely false”, noting that the government had raised penalties for the crime, accusing the CHP of exploiting the issue for political gain.

The justice minister, Bekir Bozdağ, said marriages involving minors were “unfortunately a reality” in Turkey but the men involved “were not rapists or sexual aggressors”.

He said the measure would affect some 3,000 families.

The latest controversy comes after Turkey’s constitutional court in July annulled a criminal code provision punishing as “sexual abuse” all sexual acts involving children under the age of 15.

Defenders of that law argued it made a distinction between cases of sexual acts involving a young teenager as opposed to a much younger child.

Campaigners accuse the government of not doing enough to stamp out the practice and of being more interested in pushing up the birth rate.

“It is impossible … to guarantee that there was in fact full and informed consent of the girl, not just of her family,” she said.